2022 has been a big year for Ashford, so we’ve compiled some of the highlights from the past 12 months and what they mean for the borough.

The year started with improvements to the Ashford broadband network, with significant investment in Fibre to the Premises (FTTP) being rolled out by Openreach and Netomnia. Once complete, these infrastructure improvements will benefit 50,000 households and businesses across the borough.

Cllr Neil Bell, Portfolio Holder for Planning and Development said, “One of the objectives in our Corporate Plan 2022-2024 is to enable the improvement of digital infrastructure to support the growing needs of business, voluntary sector and residents. We would like to see fast, reliable digital connectivity available across the whole borough so no one is disadvantaged in accessing online services or doing business. “I am pleased that the Ashford borough is already benefitting from investment from two companies which will provide even more options locally for our residents and businesses.” Ashford Borough Council’s Cabinet also approved the Ashford Town Centre Reset Strategy which aims to to help revitalise, enhance and embrace the intent for town centre regeneration by defining points and locations where investment will “create a vibrant, connected, and improved town centre which serves all its communities, residents, workers and visitors”.

The Town Centre Reset Strategy and associated Action Plan comes off the back of a good year for footfall on Ashford high street which has bucked the national trend, with figures showing a 20.9% increase in footfall year to date in 2022 compared with 2019.

Cllr Nathan Iliffe, portfolio holder for regeneration & economic development, said: “As the borough council, we recognise our role as an organisation that can foster our town to be an even better place in which to live, work and enjoy. This strategy provides a framework for making the town as attractive and dynamic as it can and should be”.

March saw Ashford Borough Council successful in a funding bid to the Office for Zero Emission Vehicles (OZEV), which enabled the council to deliver on plans to increase the number of Electric Vehicle Charging Points (EVCPs) in council-managed car parks.

The council was awarded a grant with a maximum value of £174,300 to install on-street charge points for those wishing to charge their plug-in electric vehicles while parked in the borough council’s car parks.

This ties in with the key priority within the council’s Corporate Plan to be a Green Pioneer to look at ways to tackle climate change with an aim to become carbon neutral by 2030. This is a commitment to reducing greenhouse gas emissions and air pollution across the borough.

Ashford Borough Council continued to respond to the various issues that have arisen from the need for new housing to achieve ‘nutrient neutrality’, due to the deterioration of Stodmarsh Lakes, a network of nationally and internationally protected lakes in the neighbouring Canterbury district. In April, Cabinet approved the next stage in the process through the delivery of new strategic wetlands within Ashford as a means of providing nutrient mitigation, and therefore allowing housing development to take place in the Stour catchment area, which makes up a significant part of the borough. This was significant progress in the Stodmarsh mitigation process. In May, a Five Year Vision and Strategy was set out for the South Ashford Garden Community (SAGC). This represented the aspirations of local residents, local organisations and key partners who were looking to ensure that these developments come forward with quality in mind, where infrastructure is planned and delivered in tandem with new homes, as the community grows.

The importance of high quality design and placemaking, guided by Garden City principles but shaped to reflect 21st century living, is a key theme running through the strategy. Most importantly, it offers a vision of living and working in the wake of Covid-19 as we all seek to recover from the impact of the pandemic and come back stronger as a community.

The South Ashford Garden Community was also allocated £755,000 in funding by the Department for Levelling Up, Housing and Communities (DLUHC). The fund supports accelerated housing delivery and high quality infrastructure in line with the garden community principles; building flexible, resilient and sustainable communities for the future.

Tenterden, part of the borough of Ashford, was named as one of 90 microclusters in the UK where creative businesses are thriving in June. It was also one of only four places named in Kent.

Research from NICRE and the AHRC Creative Industries Policy and Evidence Centre, showed that creative industries are a vital part of the Government’s Levelling Up agenda.

In August, upgrades were made to parts of the Ashford town centre, with new seating, furnishings and bunting on upper Bank Street and Middle Row.

The short-term regeneration project aimed to encourage active and healthy lifestyles by introducing informal play opportunities, attractive places to meet and dwell and the enhancement of public spaces.

It provided a new look and feel to areas of the town centre, with additional cleaning, re-decoration and new planting, bunting and seating, adding a touch of colour.

Ashford Borough Council took part in the Great Big Green Week from 24 September - 2 October. The initiative is a national celebration of community activities to tackle climate change and protect nature, and aligns with the council’s own sustainability ambitions.

Residents, businesses and community groups were encouraged to join together by taking part in activities to support and learn how they can contribute through everyday actions and choices against climate change.

Construction work for phase two of Ashford College began in October. The new wing will house classrooms and laboratories for Business, Information Technology, and Engineering. The new facilities will create a renewed focus on these up-and-coming fields, and allow 250 more students each year to access the high quality education offered at Ashford College.

The scheme includes an ‘Engineering Hub’, which will highlight the role engineering can play in creating solutions to climate change and promoting decarbonisation.

Cllr Gerry Clarkson, Executive Leader of Ashford Borough Council, commented: “The creation of the Super 6 will give a strong vehicle to publicise other projects outside of the list to a more captive audience, as was successfully achieved with the Big 8. It provides a new focus and impetus for a new inward investment campaign to help deliver these ambitious projects, but also to put Ashford on the map nationally, ensuring the maximum opportunity to attract future investment and government funding.”

Ashford International Studios at Newtown Works launched with an event to mark the official beginning of works on site. The event was attended by Ashford MP Damian Green, key Whitehall officials and stakeholders. This exciting regeneration project will bring back into use the former Newtown Works railway site in the heart of the town and creating four 20,000 SqFt TV and Film studios with associated post production offices and media village, a 120-bed hotel with 62 serviced apartments and conference space, a multi storey car park, other commercial spaces, 302 residential units, leisure facilities and a dedicated film school.

A significant amount of enabling and infrastructure work has already been undertaken, with full construction scheduled to start at Newtown Works in summer 2023. The residential element of the project, consisting of around 300 high-quality homes created within the 400,000 SqFt of Grade II Listed buildings, is on target to be completed by July 2025.

The Kent Property Market Report for 2022 launched and provided an update on how the county’s property market has performed over the past 12 months and the key projects supporting regeneration and economic growth.

Ashford Borough Council confirmed in December that a planning application had been received from Brompton for a revolutionary new factory, delivering a £100 million investment for the local area and potential for up to 4,000 jobs for the Kent economy.

Comprising a massive 4,300 SqFt production space with up to the minute audio, video equipment, lighting and computer imaging networks, a performance and audience space and technical gallery, alongside studio rehearsal spaces, offices and a café, JVHome is designed to advanced standards of sustainability and efficiency. Its ultramodern fit-out provides the capital infrastructure in order to deliver financial resilience in order to sustain a creative powerhouse far into the future.

This will enable the company to develop its artistic model to create content and run its internationally recognised education work and sophisticated programme of outreach work. At the same time, JVHome will provide the Kent community with a valuable asset, which will add to the region’s arts and health & fitness delivery, as well as contributing to the local economy.

2022 has been a momentous year for the Ashford borough, as we emerged from the Coronavirus pandemic and straight away launched some exciting projects aimed at growing the local economy and providing opportunities for all.

Despite the economic turbulence ahead, 2023 looks to be a promising year, particularly with Ashford’s Super Six projects set to be progressed or delivered. Together with the support available to the business community in the Ashford borough and the events due to take place, there is good reason to be optimistic and consider Ashford for your business’ future.

“Great opportunities can be and have been created during tough economic times” - Howard Schultz, CEO of Starbucks. 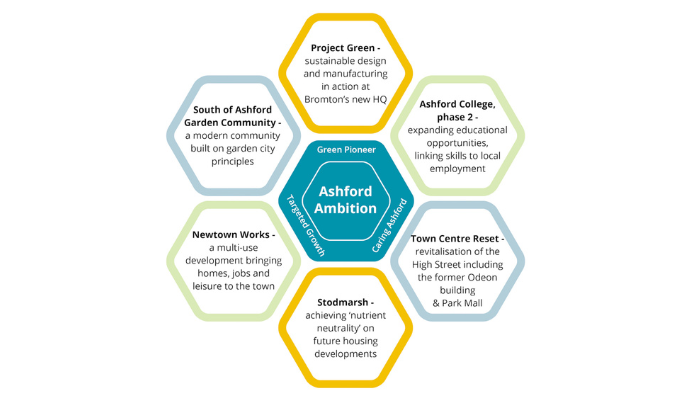